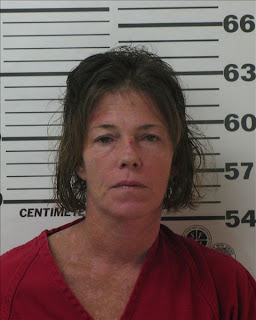 On October 9, 2009 Deputy Wells responded to 621 Mashburn Drive in reference to a disturbance.  Upon arrival Deputy Wells met with the victim and she stated that her roommate Karon Creal was throwing her belongings out of the residence.  The victim stated that Creal grabbed the telephone from her and she was struck on the arm.  Deputy Wells informed Creal that she could not throw the victim's personal property from the residence without a court eviction.  Deputy Wells attempted to talk to Creal but she refused to listen and walked away stating that she was getting her shoes.  Deputy Wells advised Creal to stop but she ignored his lawful order and ran into the woods.

A short time later Creal was located at the neighbor's residence and she ran into the woods when she saw law enforcement.  Deputy Wells ordered her to stop several times but she refused to stop until Deputy Wells advised Creal that he would contact her probation officer.  Creal turned around and walked back to Deputy Wells. When Creal was told that she was under arrest she jerked away and attempted to spit on Deputy Wells.  Creal was placed on the ground and Creal resisted arrest with violence by kicking Deputy Joseph Sabbag in the chest and face.