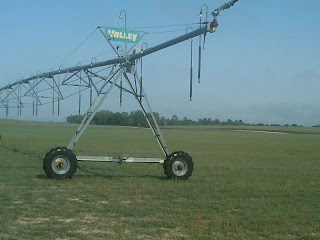 The Levy County Sheriff's Office has seen an increase in copper wire thefts. Lt. Shawn Hunt the Commander of the Ag/Marine Unit has investigated five copper wire thefts from irrigation pivots in the month of March. The thefts have occurred in the Williston & Chiefland areas and most likely are occurring at night time.

The farm thefts are felony offenses and the suspects are looking at serious time in prison if arrested and convicted. The Levy County Sheriff's Office is offering a $500.00 reward for information that leads to an arrest. Anyone with information can contact Lt. Hunt at 352-486-5111 or you can remain anonymous and call Crime Stoppers at 1-877-349-8477.

We encourage the citizens to call the Levy County Sheriff's Office and report any suspicious vehicles parked on the side of the road near irrigation pivots or vehicles in the fields at night time. Major Evan Sullivan stated that these thieves are causing thousands of dollars worth of damage to the farmers for a minimum monetary return.

With the help of the citizens we can solve these thefts and put these subjects in jail for a long time.