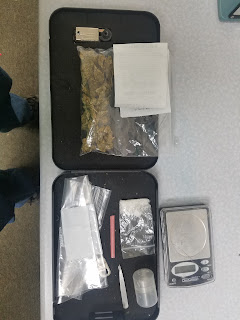 The Levy County Sheriff’s Office Drug Task Force (DTF) and Uniformed Patrol Division conducted a targeted drug enforcement operation in the Rosewood/Cedar Key area of Levy County which began yesterday evening and continued into this morning. Citizens who reside in these areas of the county have filed complaints of recent drug activity in their neighborhoods and Sheriff McCallum answered their call.

Early yesterday afternoon, K-9 Sergeant K. Kinik conducted a traffic stop in Rosewood and with the assistance of his K-9 partner Zombie located marijuana and drug paraphernalia in the vehicle. The driver was issued a notice to appear in court for both of these misdemeanor violations and released at the scene.

This morning Matthew Whyte (5-14-91) was discovered by Deputy K. Davis parked in the Cedar Key State Preserve on SR 24. Deputy Davis spoke to Whyte and during this conversation found Whyte to be in possession of methamphetamine and drug paraphernalia. Whyte, who claimed to be homeless and listed no address, was arrested and transported to the Levy County Detention Facility. Additionally, DTF investigators located homemade objects in Whyte’s car that were obviously made to conceal and transport narcotics. This investigation is still on-going and additional charges could be filed.

Sheriff McCallum has allocated additional units to continue these drug enforcement operations in this and other communities in Levy County. Sheriff McCallum said, “I will continue efforts to rid our neighborhoods of the drug dealers and drug users as we strive to provide a safer environment for our children and families.”
Posted by Lt. Scott Tummond at 4:12 PM
Email ThisBlogThis!Share to TwitterShare to FacebookShare to Pinterest
Newer Post Older Post Home