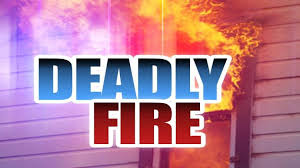 On Saturday March 24 at approximately 11:15 pm the Levy County Sheriff’s Office and the Levy County Department of Public Safety (DPS), along with multiple fire units responded to 11830 NE 81 Terrace to multiple 911 calls about a structure fire. Fire and law enforcement officials arrived to find a single wide mobile home fully engulfed in flames. Witnesses on scene told responding units that there was still a person inside the home. This person, identified as 79 year old Bronson resident Felix Shackelford, was unable to escape and did succumb to the fire.

Witness reported Shackelford had been working on a propane space heater earlier in the day and when he lit it, it exploded. Shackelford attempted to extinguish the flames and was trapped inside the home. His wife, Margaret, was able to escape. Their son, Author Carroza, had been working on a vehicle in the yard and had taken the vehicle on a test run when the fire started. He attempted to gain entry into the home after the fire started, but was not able to locate his father inside due to the extreme heat.

The Florida State Fire Marshal responded to assist in the investigation with the LCSO. The fire has been deemed accidental. The Red Cross has been contacted and is assisting the family.
Posted by Lt. Scott Tummond at 3:45 PM
Email ThisBlogThis!Share to TwitterShare to FacebookShare to Pinterest
Newer Post Older Post Home