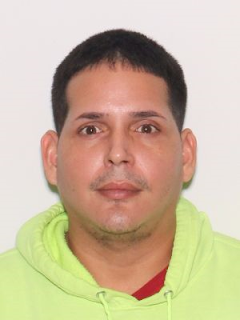 At 7:53 PM on August 11, 2019 Levy County Deputies responded to CR 464 in the south eastern area of Levy County. A 911 caller reported finding the body of an unidentified male on the side of the road. Deputies arrived and immediately secured the area as a crime scene. Levy County Detectives and Crime Scene was dispatched to the scene and assumed the investigation.

Detectives learned the identity of the person as Jafet Padin Rodriguez 9/14/85 of Ocala. The Marion County Sheriff’s Office responded to a suspicious incident earlier and was attempting to locate Rodriguez to check his well being. When they were not able to locate him a BOLO (Be On The Lookout) was issued. This BOLO aided in identifying Rodriguez. Levy County Detectives determined that Rodriguez suffered a single gunshot wound which ended his life.

Levy County Detectives are asking our community and the community of Marion County for assistance. This investigation has determined Rodriguez left his home on Saturday evening to go clubbing in the Ocala area. He never returned home. Anyone who saw Rodriguez in or nearby any nightclubs in Ocala and has information that could assist this investigation is asked to call Detective Mike McNeil at 352-486-5111. If you have information and wish to remain anonymous you can contact Crime Stoppers at 1-877-349-8477.